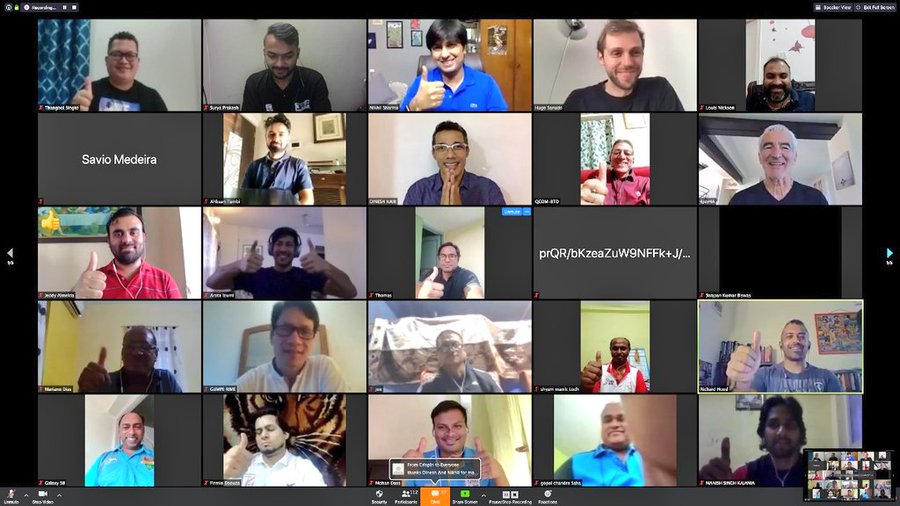 After the success of AIFC Webinar in football coaching, Women’s Football Development & for the Indian Coaches in the Middle East; a special AIFC WEBtalk with former France National Team Coach Raymond Domenech was held on 30th May 2020.

The WEBtalk was exclusively for Pro & A licensed coaches only. It saw a total of 130 coaches joining the session which was moderated by AIFC Director Dinesh Nair.

“The WEBtalk was a success because of the candidness of Mr. Domenech and his willingness to share his experiences. It was a great session of learning especially his insights into youth football. Would like to thank Mr. Nikhil Sharma (founder & CEO of Zlait Sports Management) & Hugo Sanudo (MDV Sports) for helping us organise this webtalk,” said Dinesh Nair.

Raymond Domenech was honest in his responses. When asked about his thoughts on Indian football, he said that he doesn’t follow it to comment about the same.

He also spoke of the players that played under him. When asked the best five players he has coached, he said, “In no particular order, Lilian Thuram, Zinedine Zidane, Franck Ribéry, Thierry Henry and Claude Makélélé.”

The session dwelled into him talking about youth football & senior football where he stressed that former is all about “development” while the latter is about “winning & results”.

The WEBtalk ended with a message from the Frenchman to all the Indian Coaches.

“Believe in what you are doing, do the best you do everytime. Be curious, don’t settle with what you know, keep learning and updating yourself everytime. And the best thing you can do is to educate yourself and to teach and share with other coaches. I think that is the best way to grow.”

You can also watch the full video here.

#AIFCWebinar: Responsibility of all to have more matches – Scott O’Donell

Experiences of professional coaches to help you ‘not give up’