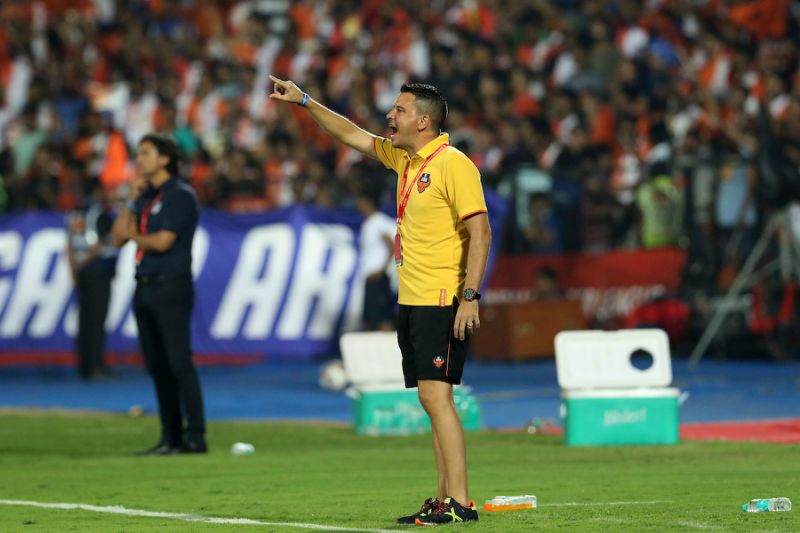 Now while I may not have spoken in depth about how FC Goa creates a free man, I will share some details about Lobera’s positional play which will help you understand the concept easier. Positional play is not about one single concept like free man or possession, it is instead a combination of multiple concepts which all contribute to what you end up seeing on matchday. The next concept I will talk about is the search for superiority. Teams that practice positional play may prefer superiority in different parts of the pitch, in different phases of the game or throughout the pitch in every moment. One such principle is creating superiority behind the line of pressure. Adin Osmanbasic, who is a coach and analyst at Atlanta United FC, brought to light the idea of how you can gain an advantage if your attacking principles are completely opposite to your opponent’s defending principles. Let me simplify this, for example, if the opponent believes in a high press, it is almost certain that they will put pressure on the ball carrier. Now if you flip this around to think about how you can create an advantage from an attacking standpoint, an automatic area to take advantage of would be the space behind the opposition player that has pressed the ball carrier. Pressure is almost always forward; this means an attacker can create a superiority behind the opponent who has pressed forward.

In the game against Bengaluru FC, the Gaurs adopted a lot of verticality (using the length of the pitch to progress via passes or dribbles as opposed to the width) in their intention to score. This doesn’t mean that Goa didn’t use width, since the example with Mandar shows how crucial width is, to create superiorities and, as a concept within positional play. Coming to the idea of verticality in this game, I don’t know if this was an area Lobera and his team identified in their analysis before the game or the spaces appeared because of Goa’s deep and wide players. Knowing how positional play works, I would lean towards Goa identifying this (verticality) as a tool to give them the best chance to win. A simple principle in positional play is making the opponent perform exactly what you want them to before taking advantage of it. To break this down, the idea of creating superiority behind the line of pressure starts with attracting pressure. If your centre back has the ball, the opposition forward/s are most likely to put pressure. Further up the pitch you go, the position that will apply pressure changes. Midfielders will put pressure on midfielders and defenders will put pressure on the strikers.

Chhetri is the furthest forward putting pressure along with BFC’s midfielders and wingers. A key principle in defense is compactness, which roughly translates to reducing distances between your team so the opposition can’t play through you. As an attacking team, you want to make sure you stretch the defending team as much as possible (the opposite of compactness) so you can create spaces between the lines and play through them. A good way to do this is by using the width and depth of the pitch to pin the defenders as deep and wide as you can. Goa do that very well through their wide players and centre forward. Once you pin the defenders, this gives your forwards 2 spaces to receive the ball in – in front of the defenders / behind the defenders.

In the lead up to this goal, I had one question – how did Boumous find himself in that much space? The answer to that lies in FC Goa’s ability to be patient, use short passes in their build up, attract opponents and then play a line breaking pass into Boumous. I explained earlier how Goa used width and depth to pin the Bengaluru back four, so the only reasonable explanation to how Boumous is relatively unmarked lies in Goa’s ability to keep possession and lure opponents before finding the free man on the other side. Watching Pep Guardiola in the Prime Video documentary ‘All or nothing’, I saw an interesting concept where the free man will always originate on the diagonally opposite side to where the possession starts from. This happens because the opponents get attracted to the ball side (compactness) leaving the other side (their blind side) relatively free so they can press in numbers and by potentially overloading the attackers, force them into mistakes and recover the ball.

What Goa have effectively done is used Bengaluru’s behaviours to create a favourable situation for themselves. By using short passes and being patient in the build-up, they have effectively lured Bengaluru into pressing them leaving their blind side open. Boumous recognises this as a chance to create superiority behind the multiple lines of pressure and receives a line breaking pass from Jahouh. The attacking players from FC Goa – Corominas, Jackichand and Brandon have effectively stretched and pinned the back 4 which means there is some space between the midfield and defensive lines for Corominas to roam as a false 9. As the ball travels to Boumous, Corominas recognises that there will be pressure on Boumous from the opposition midfielder, which means he has to try and create superiority behind that line of pressure.

Fast forward a few seconds to Mandar (circled, left) playing it into Corominas (circled, right), who is still between the lines because Jackichand is pinning the defenders to a deeper line of restraint, and the striker finds the third man (Boumous) behind the line of pressure. The third man is another important concept since the defenders keep their eyes on the ball and are caught unaware of the third man since they don’t expect that action.

‘The third man is impossible to defend’ says Xavi.

Numerical Superiority – This basic concept revolves around the idea of having more numbers than the opponent in certain spaces on the pitch. Against teams that press high, your Goalkeeper becomes that numerically superior player. By looking at the image below, let’s assume Mandar (the player circled on the far left) were to receive the pass, this would give Goa a 5 v 4 numerical superiority (excluding the opponent goalkeeper) in that moment and a potential goal scoring opportunity.

The next superiority is Positional Superiority. In its simplest form, this superiority revolves around being in a better position than the opponent. By looking at the image below, you can see Lenny’s (player about to receive the ball near two blue shirts) body position which will allow him to receive on the back foot, shield the player coming from his blind side and progress into the space ahead. The next form of positional superiority is also the position you choose on the pitch. Brandon is the most positionally superior player for FC Goa because he is between 2 defensive lines relatively unopposed. This makes him a free man and he can affect the opponent.

The fourth superiority that exists is dynamic superiority. This simply looks into the use of space via the physical/mental quality of the player. By using dynamic superiority, you are arriving into space better or quicker than the opponent. A better term to explain this would be ‘dynamic space occupation’. Since it is a matter of space, we can argue that understanding and exploiting space are vital to use dynamic superiority.

Chicharito gave a good example of this in an interview to Rio Ferdinand that you can find it in the video below:

We can also talk about the image below where Mandar (circled) is a few yards behind the line of restraint and has to chase the pass from a walking start as opposed to a running start or being a few yards higher. It’s easy as an analyst to point these small details but there’s a lot more in football that we can’t see with our eyes. Maybe Mandar wasn’t expecting a pass into space since Brandon is super accurate with his long pass and Mandar probably expected the pass to feet. It could also be that Mandar has never received a diagonal pass in the air from Brandon in that area and expected a different outcome. We will talk about this in the next superiority.

The next superiority and the final one is Socio Affectiva. This is about relationships between the players and how that can affect the performance on the pitch. Something as simple as a rival player who has said something inappropriate to one of your players and this causes him to react or play with emotion (Zidane in the 2006 world cup final) which could affect the tactical plan or players. It could also be an uncalled change in the line-up through an injury or red card. A good example of this is Boumous’ injury in the semi-final and in his replacement (Edu Bedia) they had a different player. So, while they missed Boumous’ verticality, the team had to adapt to what his replacement could give them.

Stay tuned for Part 3 and you can read the Part 1 here.