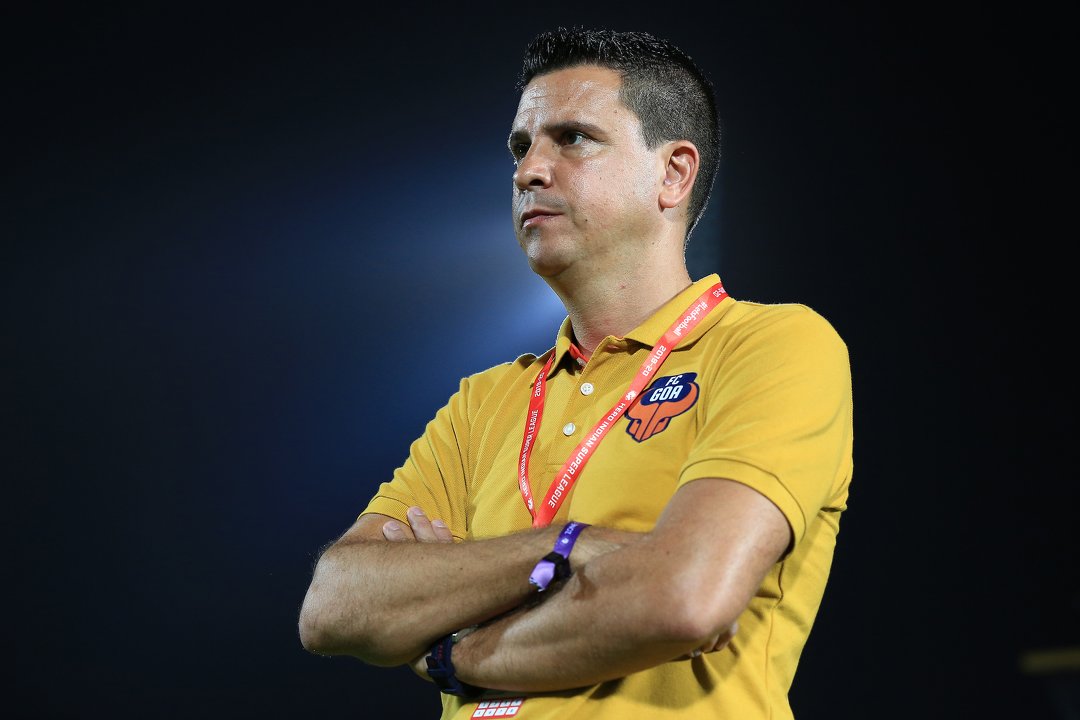 The next concept we are going to talk about in FC Goa’s positional play is Possession. Why is it that important to keep the ball as opposed to playing direct or scoring in 4 passes? If you ask any coach, let’s take Guardiola’s example, whether he would prefer scoring after one pass or twenty, I think he would choose the former. The point is every coach is going to choose the easiest way to score, only the ideas and methods would change based on the players they have. There are more factors that affect the way the coach chooses to play – club philosophy, opponent, competition stage, squad depth, etc. but these are not of primary importance to the content I want to share with you. If you look at the video below, Goa are successful in keeping possession and progressing to the finalisation zone. Possession without progression is almost of no use to any team (unless you are trying to run the clock down). In positional play you possess to score. The main reason teams that use positional play will keep possession of the ball is so they can start to use other concepts associated to positional play (superiorities, free-man, third man, etc).

Goa try to manipulate the opponent’s defensive structure by moving the ball, trying to look for openings through / around the opponent. If you go back to the defensive principles in football, every opponent will try to put pressure or delay. They will either shift or stay. They will either make the pitch compact or keep distances big. By keeping the ball in their own half in the first few seconds, Goa is trying to see the reaction they will get from the opponent. If the opponent chooses to press, it will open spaces behind them. If the opponent chooses to delay and reorganise behind the ball, it will allow Goa to start circulation, move to the next receiving line and try to start probing for openings within the opponent’s organisation. There are a lot of hidden gems in the clip above that coaches can find helpful in understanding positional play. Corominas’ run to stretch the line of restraint, Boumous’ constant search for free space, Brandon and Mandar’s positional rotation, etc. The purpose of possession in positional play is so you can allow your principles, sub principles and sub sub principles to flourish while trying to achieve the overall objective of scoring a goal.

A common trend we have observed with positional play is build up play using the goalkeeper as opposed to kicking it beyond the half-line to win the aerial duel. I think there’s a common misconception about the long pass from the goal kick. Pep Guardiola is constantly challenging coaching norms and using football principles along with the laws of the game to find solutions that can help him win the game. He has used Ederson’s passing quality + the offside rule and merged it with his football principles to stretch the pitch and make use of the space that exists between the defenders or behind them to find a direct route to goal. You can watch a good example below:

However, teams can find a good solution to defend against this goal kick – drop your defensive line/s deeper and win the aerial duel. Now comes the space game – if the defensive line drops deeper, the space is near the goalkeeper or between the midfield and forward lines (I am assuming the midfield line would also drop deep to support the defensive line). This means the best way to attack the opponent would be to keep possession by using the closest defender to attract opponents so space can be created elsewhere (behind/side).

If you look at the image above, you will see Mourtada Fall, who received the pass from his goalkeeper (Nawaz) pass it back to Nawaz since routes to progress forward were blocked. On receiving it back from the goalkeeper (see image below), Fall has now attracted 2 Chennai players to press him. This means Goa have a numerical overload somewhere on the pitch. If you remember the principles of football in attack, you will understand how Goa use depth to pin the Chennai defensive line closer to their own penalty box. This creates space between the midfield and defensive lines for Edu Bedia to receive an aerial ball fairly unopposed. The aim of positional play is to create a free man relatively unopposed and right before Goa are dispossessed, you see Brandon Fernandes with positional superiority almost successfully receive the ball with a lot of space (which would have made him the free man). You can now see how build up successfully allows you to keep possession and disorganise the opponent in the search for superiority across the pitch. Unfortunately for Indian teams that practice positional play, opposition will rarely press that high up the pitch. This means rarely will we see the use of the goalkeeper to attract defenders to create overloads behind them. One way you could work around this is by pushing your goalkeeper higher up the pitch, something you can see below:

You need a high technical level for this along with the high risk but the reward can be hugely satisfying if you are able to dominate your opponent.

Jose Carlos Unzue said ‘the aim of positional play is to overcome the opponent with the ball and win the ball back on ball loss’. For those of you who don’t know Unzue might recognise him as the assistant to Luis Enrique when the Spaniard was coaching Barcelona. He is not the only one to stress on the importance of quick recovery of the ball, in fact Lobera, too when asked to elaborate his style of play, had this to say ‘lots of short passes, we keep possession and when we lose the ball, we get it back quickly’. Towards the end of the video you saw above, pay attention to the behaviour of the Goa players on ball loss. You can see how quickly the players make the pitch small, change their running stance from passive to aggressive and force play backwards. It doesn’t stop there when you see Corominas put pressure on the opponent goalkeeper forcing him to play longer and effectively recover the ball. This ability to press successfully does not happen by chance but is possible because of the collectiveness of the team during build up. Build up and possession help you stay connected in small distances to make recovery of the ball easier.

So what can we expect in the future with teams that practice positional play in the ISL? In football, your principles and fundamentals stay the same but you always adapt it to the quality of the players. Something you can watch Pep Guardiola explain below:

Given Jahouh’s extraordinary range of passing and wide players with a lot of speed in Jackichand and Mandar, it would be wise to use the diagonal long ball to your advantage. Similarly, looking at Corominas’ ability to roam between the lines and Boumous’ knack for forward runs behind the last line are great qualities to use within your positional play game model. Seirul-lo said the game model is only useful if it never put a ceiling to the potential and level of the players. And like you saw with Lobera’s use of positional play with FC Goa, he adapted very well his philosophy to the players in his team.

“Well, we won’t play like Barcelona as I’m not Luis Enrique or Pep Guardiola. And neither are the players we have Messi and Iniesta. But, it is true that my footballing education does come from the Barca School of thought. So you will see an attacking, aggressive and fast paced style of play where there is little room for speculation.”

This is a good example of using the quality of your players and adapting your version of positional play to the players you have. And Lobera was true to his word, there was an aggressive side to his team and the pace of the game increased based on the opponent and stage of the competition. Against Bengaluru FC, at the Kanteerava stadium, you saw Goa start the game rapidly not allowing Bengaluru to settle in the game, making the game heavily transitional, like basketball almost.

When he was asked about his success with Goa, this is what Lobera had to say,

“Well there are lots of important things to consider. First I would say is to have the ideal profile of players to be able to develop this type of football. I believe I have a good profile of players and they are comfortable playing in this manner. Second it’s extremely important that the team believes in this idea and in the way of playing.”

We’ve touched upon the importance of having a profile of players that can play this way but the buy in from players is the next most important in positional play. A good example is Arteta with his current Arsenal squad where you can see the buy in from most players and the ones that haven’t are not featuring on match day. That’s ruthless leadership but one with a clear philosophy of how the team must play.

Now that we know some details about positional play, how can we train this? A quick look through FC Goa’s official YouTube page tells me that they practice rondos a lot and often use small sided games to enable transfer into match-day. Having spoken about players that can fit your philosophy, I see a lot of teams in the future adopt this style of play. What is super important though is having players go through this footballing education right from their formative years. This is why FC Barcelona play the football they do because they’ve trained and learnt it for years starting from ages as young as six. Cesc Fabregas and Thierry Henry talk about the importance of this footballing education which you can view below:

I will share below one common exercise (used famously by Pep Guardiola) that you can use to incorporate various fundamentals of positional play.

You can already see how basic concepts can flourish through this exercise. You can coach width, depth, possession, breaking lines, pinning, dismarking, third man, free man, transition to defense, pressing, compact, etc. The list of topics is endless. You can also play around with the number of players, size of the pitch, the shape of the pitch, the scoring system, etc. Some other task constraints can be number of touches or passes before progressing to the next zone. The rules and constraints of your training will all depend on your game model and the principles you want to highlight within the session. If my main objective of the session would be to create a free player, I would not play with a +3 overload, since that would go against my objective of creating the free player. Instead, I would use a situation of numerical equality or even an under-load situation to bring out my objective. This depends a lot on the level of players partaking in the session but also on the stage of the season along with various other factors like physical loading, cognitive loading and socio-affectiva factors.

References for the article: Brilliant Orange by David Winner; Complex Football by Javier Mallo; www.playpositionally.com; Interviews quoted from the websites of thefangarage, marca and scroll; Screenshots are not from the ISL.